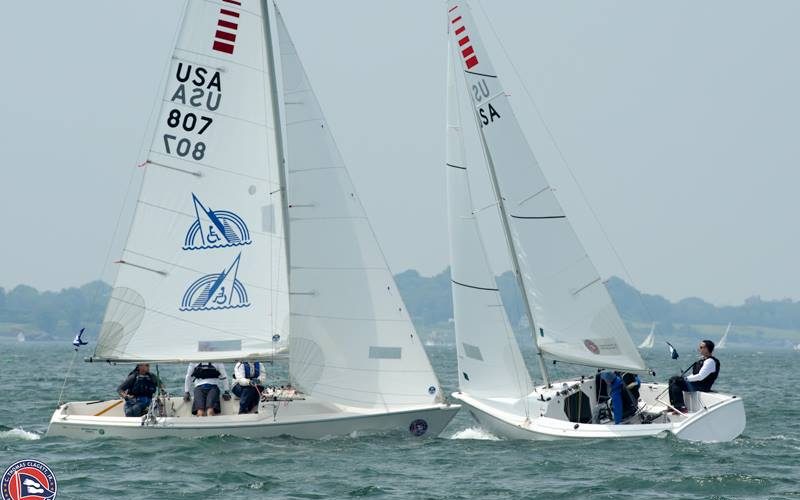 NEWPORT, R.I.  —  The C. Thomas Clagett, Jr. Memorial Clinic and Regatta wrapped up on Sunday in Newport, with the Y-Knot team sliding to victory by one point in the Sonar fleet in their first ever Clagett appearance. Dave Whalen, Dan Kennedy and Spencer Raggio sailed in the new Sonar that was provided to Y-Knot by the Clagett Boat Grant Program last year.

In the Sonar class the three teams left everything on the race course with very close racing and finishes for the entire 10 race series. After taking home the gold in the Sonar class, the Lake George, NY team from Y-Knot Sailing couldn’t have been happier with their results.

Spencer Raggio, tactician and main trimmer for Y-Knot, said “If it wasn’t for the Clagett and the Clagett Boat Grant Program we wouldn’t be here. Dave steered the boat using a sip ‘n’ puff system, and we were fortunate to be able to tap the knowledge and expertise of Gene Hinkel, Bam Miller and Steve Alvey to fit the system to the boat, get it working, and keep it working. We saw really close racing and some photo finishes with the other Sonars. And being coached by Mike Ingham made a huge difference, especially since we’re so new to the Sonar. Mike is just back from Rio where he coached the Paralympic team, and he raised everyone’s game in the Sonar fleet.”

Helmsman Dave Whalen added “I certainly would not have been involved had it not been for a gigantic effort on the part of our volunteers and I really can’t thank them enough.  It’s really fun to sail with a crew on the Sonar. I’m super grateful for being able to get out there and go sailing.”

Canadian Paul Tingley won the top prize in the 2.4mR fleets. Tingley, no stranger to the Clagett or the 2.4mR, won a bronze medal in Rio at the 2016 Paralympic Games in the Sonar and a gold medal in 2008 the 2.4mR. He has represented Canada at five Paralympic Games. “I love coming to The Clagett and plan on being here racing for many more years to come. It was the tightest racing I’ve seen here and I had to make every race count,” said Tingley.

Closing the regatta for the 15th year, Clagett President and Co-Founder, Judy McLennan commented, ” We’ve had another successful year and I am thrilled that we have had the chance to have so many sailors on a Clagett start line. We are looking forward to being back in Oyster Bay at Oakcliff Sailing Center in August with the Clagett/Oakcliff Match Racing Regatta and being able to provide the opportunity for sailors to increase their match racing skills which they can then use in fleet racing.”

Dave Whalen and Spencer Raggio will be returning to compete in the Clagett/Oakcliff match racing event, representing Y-Knot there for the second year.

The Y-Knot List is an email mailing list that provides a communications channel for members, sailors, volunteers and all others interested in Y-Knot. Any member can post a message to the list, we only ask that all messages be related to sailing, disabled sailing and other issues of interest to Y-Knot sailors and volunteers.